Matches have been part of our lives for well over a hundred years. Everyone is familiar with matchbooks, where the match must be torn away to strike it and the matchbox, where the matches are loosely packed in a cardboard tray. The outer covers of both of these can be decorated with the manufacturers logo or with advertising. Matchbooks were at their peak in the 1940’s and 50’s, when they were popular souvenir items, but they have made something of a comeback recently due to the public interest in retro advertising. 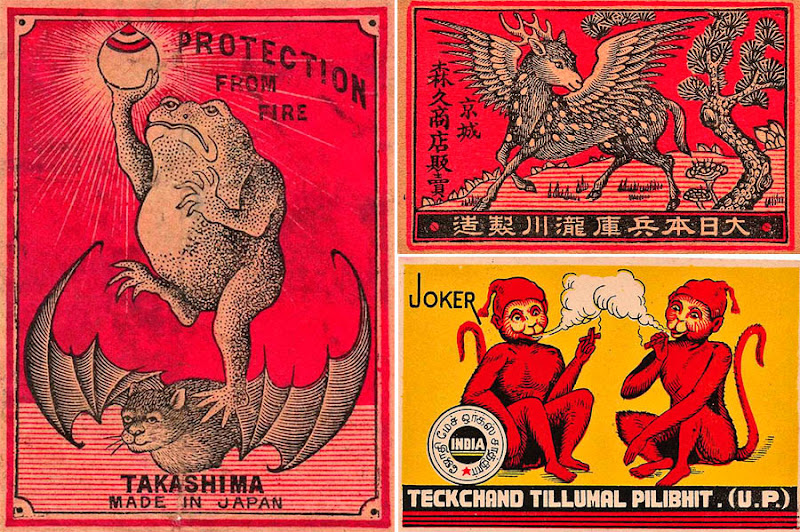 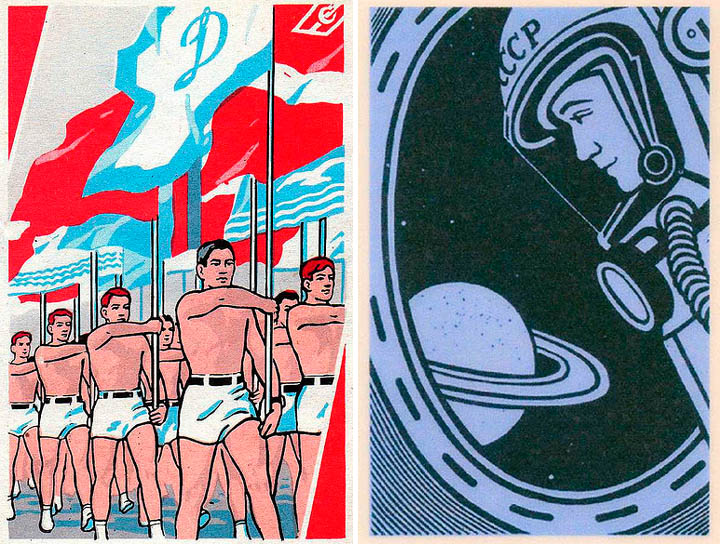 The collecting of matchboxes, matchbooks, match labels and other match-related items is called phillumeny and is, like the collecting of stamps, a specialized field of interest. Peculiar Postage, which previously appeared here on Dark Roasted Blend, was not intended as a detailed study of stamps, merely a look at some of the more curious examples. Similarly, this article examines some of the most fascinating matchboxes and match covers from years gone by, from around the world.

This box from 1880 contains Bryant and May’s flaming fusees, apparently guaranteed to ignite even in wind or pouring rain. The fusee was a large-headed type of match for lighting pipes or cigars, presumably when out in the open: 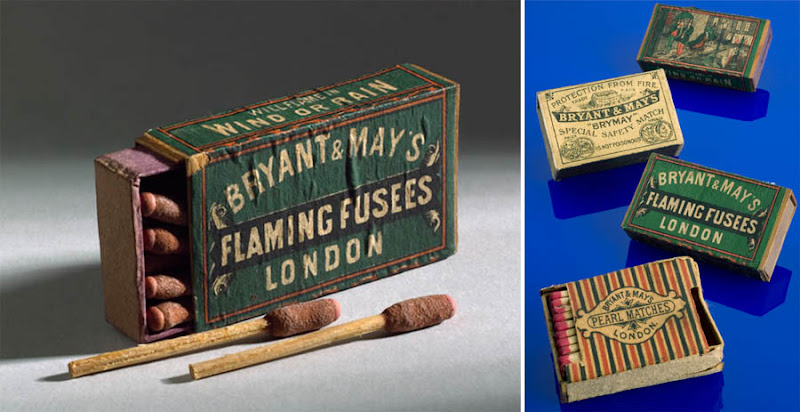 From around a century later, these matches could perhaps even be described as supersonic, being formerly available to passengers on Concorde flights:

Also from an aircraft, this matchbook bearing the US Presidential seal is from Air Force One during the Truman administration:

How about this Fritokid, inviting you to meet him in Disneyland? –

This one from Poland encourages people to shower after returning home from work (left, below)… and a crazy character on an East Germany match cover (right, below): 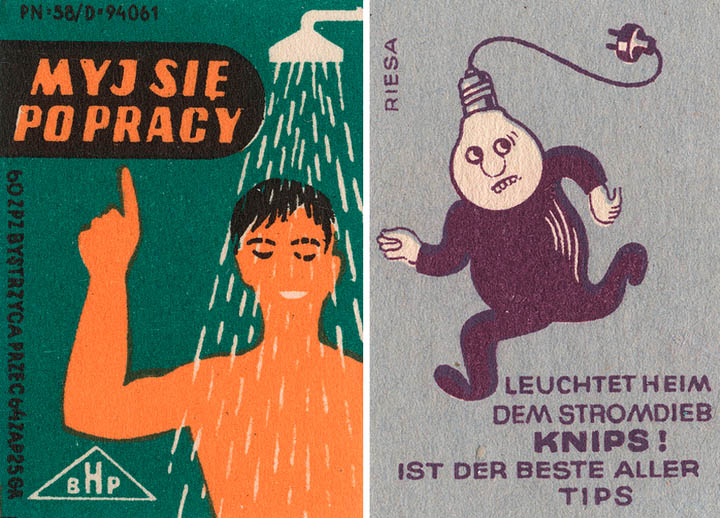 Also from Germany, this one appears to be advertising getting milk directly from the source (left), and on the right: different kind of beverage and a clearly happy customer. 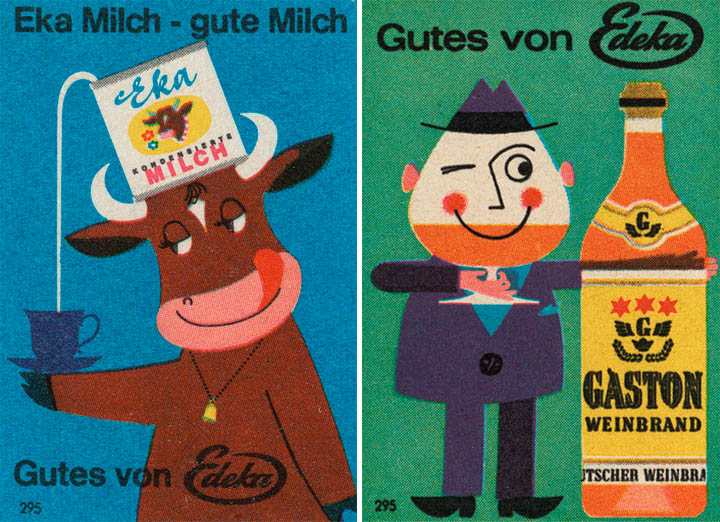 This lady appears to be so delighted with her washing machine that she forgot to get dressed before hanging the clothes out to dry (left). ON the right: “All Men Are Beasts?!” –

Here’s a couple from the USSR, commemorating Soviet achievements in space exploration. Traveling on board Sputnik II, the dog Laika became the first living Earth creature to be placed in orbit in November 1957 (left):

Right image above: Sputnik 4 was launched in 1961 and involved a test flight of the Vostok spacecraft that was being prepared for manned missions into space.

Another Soviet era cover, this matchbox decorated with a Soviet armoured personnel carrier dates from the Cold War (left below). The one on the right depicts a monument in Donetsk, Ukraine, dedicated to the commander who liberated the city from the Germans in 1943:

Here a much earlier war is recalled, depicting the Russian battle against Napoleon at Borodino in 1812: 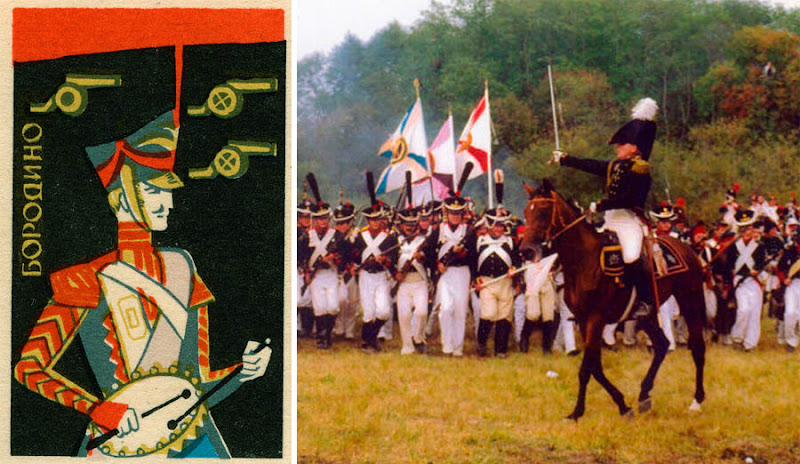 This Hungarian lady’s just been shopping on her scooter by the looks of things (left); Also from Hungary, an advertisement for insuring your pig (right):

Don’t light a campfire in the Lithuanian forest, or else this angry tree will be sure to get you: 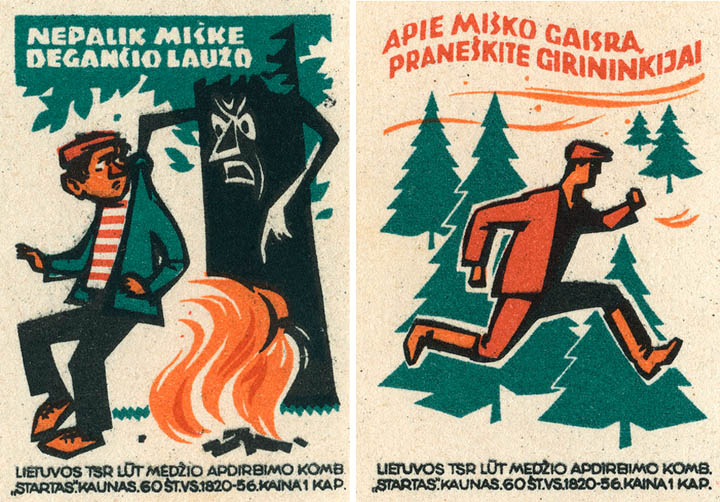 This Czech example advises people against heavy drinking, reminding them of all the things they might have to sacrifice if they develop a problem with alcohol (left below). While the Czech one on the right implores the public not to abuse emergency services for what may be trivial injuries: 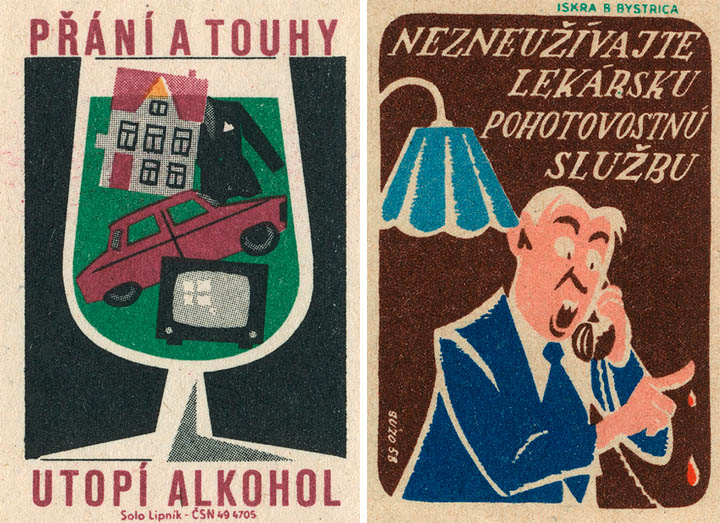 These great examples are all from Japan. This robot certainly appears pretty friendly (left); the one on the right is a little odd, but very dramatic, nonetheless: 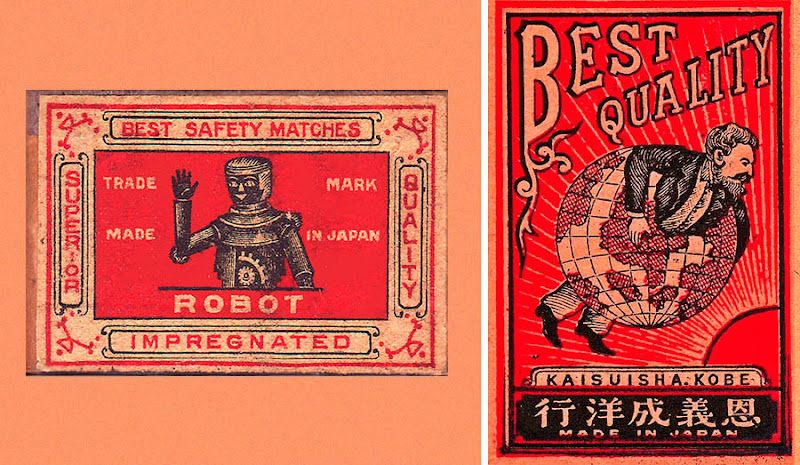 Here’s a great picture from 1935 with a Samurai warrior and a tiger:

From China, how about these superhero themed matchbox covers (left). And the one on the right is just great, a collection of shadow puppet demonstrations, also from China:

This one on the laft below is from Thailand (a lot more covers here). The platypus on the right is a little unusual, from India in 1930: 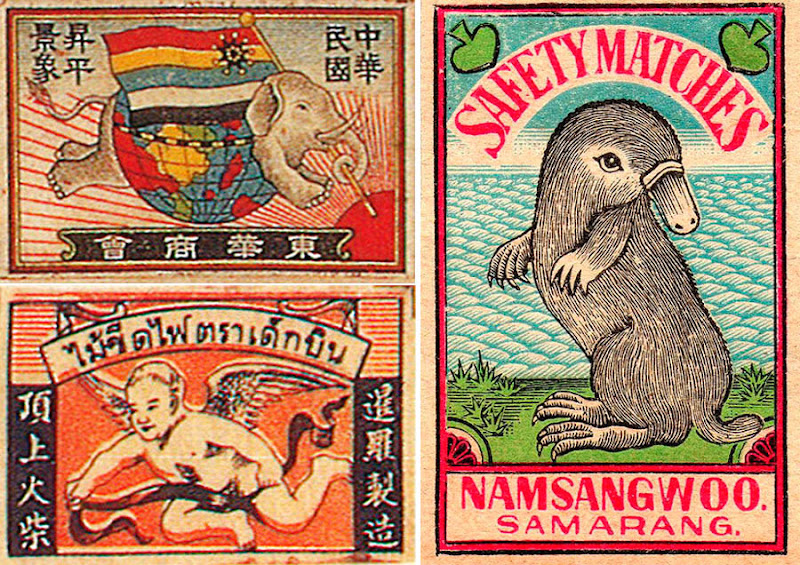 Here are some great Flickr sets of matchbox covers – here and here.

And finally, from Belgium in 1950, an undoubtedly frequent buyer of matches, based on his smoking a cigarette, cigar and pipe at the same time; 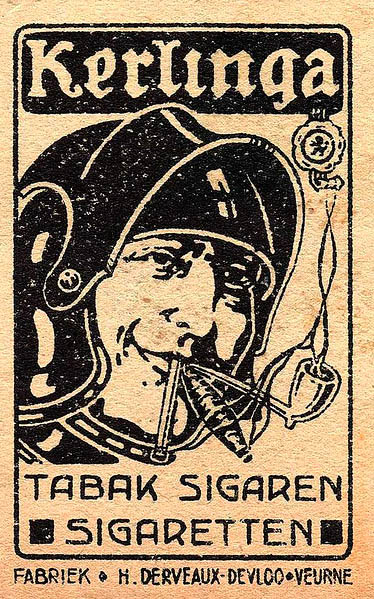